Posted at 19:38h in Uncategorized by Androow 0 Comments
1 Like 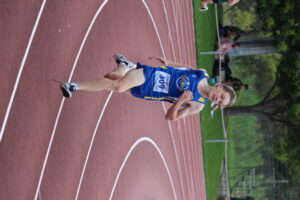 Athletics Chilwell junior athlete Caleb Kilpatrick has provided one of the highlights of the 2021 Victorian Little Athletics Championships, winning the sprinting triple and claiming both the national and state record in the 400 metres (subject to confirmation). Caleb’s stunning performance in winning gold in the 14 Boys 100m, 200m and 400m races headed strong performances by Chilwell athletes at Lakeside Stadium on March 13-14, competing as members of the Geelong Centre.

Also claiming gold was Teagan Zurawel, who cleared 1.67 metres in the Girls 15 High Jump. One of the junior club’s most versatile athletes, Teagan also claimed bronze in the Girls 15 300m hurdles (49.75s).

Having already been crowned State champion across 100m, 200m and 400m in the Under 15 age group at the Victorian Track and Field Championships (senior competition) in January, Caleb came into the Little Athletics state deciders in hot form. He crossed the line first in the 200m on Saturday in 23.72 sec and followed it up on Sunday with wins in the 100m (11.90 sec) and 400m (50.81 sec). The latter performance in one of the last events of the championships was especially dominant – after results were tallied from three timed finals, Caleb’s time was an incredible 5.3 sec ahead of the silver medal winner and broke the State record by 1.24 sec (subject to confirmation), which has stood since 2008.

Sorry, the comment form is closed at this time.